Strengthening the foundation and replacing the artificial surface of the football field at ul. Sulechowska in Zielona Góra

The scope of work included replacing the artificial turf pitch along with strengthening the foundation. The sports field is intended for playing high-rank FIFA matches . The presented pavement system confirmed the compliance of parameters with FIFA Quality Concept for Football Turf.

In the area of ​​the investment, there were no problems with groundwater, and the native soil was soil with a high filtration rate. The existing foundation did not carry the load sufficiently, especially during maintenance and servicing of the surface, as well as during mechanical snow removal. During the works performed, local deformations of the foundation occurred, manifesting in local undercuts and troughs on the pavement. In order to improve the load-bearing capacity of the foundation, the AT CELL cell system was used.

Properly compacted backfill in the form of stone crushed stone with a fraction of 0-31.5mm together with the AT CELL geocell system effectively prevents uneven settling of the sports field surface. In addition, the 50mm thick layer of embankment, after compaction, prevented cellular geogrid imprinting on the grass surface. Artificial football grass was laid on the prepared and constructed foundation, which was then covered with quartz sand and green rubber granulate. 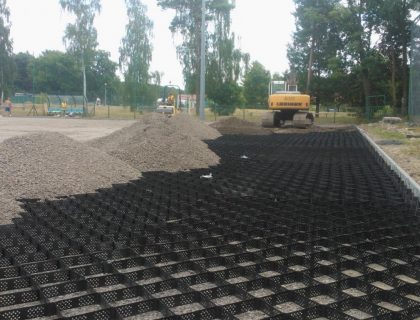 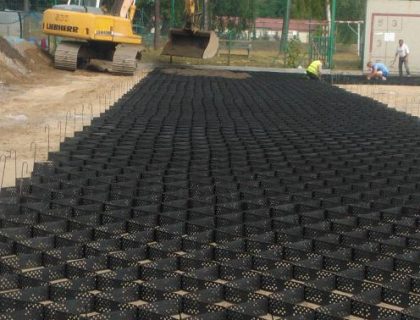